Rules of Civility: About the Book 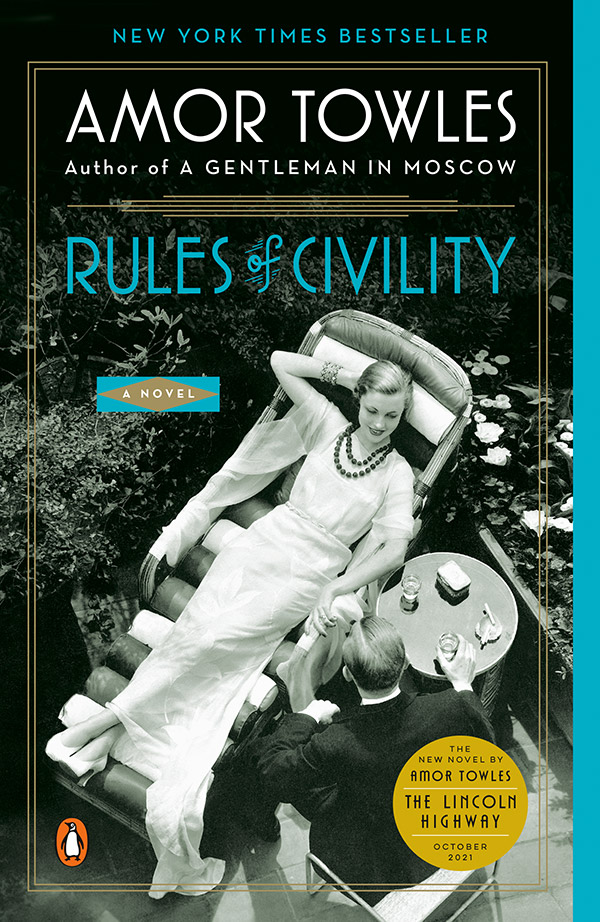 Set in New York City in 1938, Rules of Civility tells the story of a watershed year in the life of an uncompromising twenty-five-year-old named Katey Kontent. Armed with little more than a formidable intellect, a bracing wit, and her own brand of cool nerve, Katey embarks on a journey from a Wall Street secretarial pool through the upper echelons of New York society in search of a brighter future.

The story opens on New Year’s Eve in a Greenwich Village jazz bar, where Katey and her boardinghouse roommate Eve happen to meet Tinker Grey, a handsome banker with royal blue eyes and a ready smile. This chance encounter and its startling consequences cast Katey off her current course, but end up providing her unexpected access to the rarified offices of Conde Nast and a glittering new social circle. Befriended in turn by a shy, principled multimillionaire, an Upper East Side ne’er-do-well, and a single-minded widow who is ahead of her times, Katey has the chance to experience first hand the poise secured by wealth and station, but also the aspirations, envy, disloyalty, and desires that reside just below the surface. Even as she waits for circumstances to bring Tinker back into her orbit, she will learn how individual choices become the means by which life crystallizes loss.

“This very good first novel about striving and surviving in Depression-era Manhattan deserves attention…The great strength of Rules of Civility is in the sharp, sure-handed…evocation of Manhattan in the late ‘30s…  Advance reviews of Mr. Towles’s novel have rarely failed to bring up F. Scott’s name. Who needs such burdensome comparisons? On the evidence of “Rules of Civility,” being Amor Towles should be plenty good enough.”–Wall Street Journal

“Put on some Billie Holiday, pour a dry martini and immerse yourself in the eventful life of Katey Kontent…[Towles] clearly knows the privileged world he’s writing about, as well as the vivid, sometimes reckless characters who inhabit it.”–People

“Brilliantly realized…A sharply stylish debut…the period details…are precise and evocative…but they never detract from the characters.  Their issues are the eternal ones of identity and self-worth, set in stark relief in a troubled world.”–The Boston Globe

“[A] wonderful debut novel…Towles [plays] with some of the great themes of love and class, luck and fated encounters that animated Wharton novels such as The House of Mirth and The Age of Innocence.”–The Chicago Tribune

“Even the most jaded New Yorker can see the beauty in Amor Towles’ Rules of Civility, the antiqued portrait of an unlikely jet set making the most of Manhattan.”–The San Francisco Chronicle

“Glamorous Gotham in one to relish…a book that enchants on first reading and only improves on the second.  It’s a novel of manners, though it’s also a love letter to Manhattan on the eve of World War II, F. Scott Fitzgerald, and the way certain people lived back then, or how we like to imagine they did through the smoke-and-gin filter of great books, movies, and indelible images.”–The Philadelphia Inquirer

“The new novel we couldn’t put down…in the crisp, noirish prose of the era, Towles portrays complex relationships in a city that is at once melting pot and elitist enclave – and a thoroughly modern heroine who fearlessly claims her place in it.”–O, the Oprah Magazine

“It’s how Towles shades in the story that’s most interesting, elegantly drawing a picture of a time and place seldom depicted in the current culture…what’s also impressive is the (male) author’s command of the strong, first-person female voice.”–USA Today

“The sleeper novel of the summer…With writing so sharp you could stab your finger on it, Rules of Civility draws the reader into an exploration of love and timing, friendship and betrayal, class and money, all played out among brilliant dialogue and quick plotting…the writing is so luxurious, veering from playful to piercing, that the reader slows to savor every sentence…Brilliantly, Towles captures a specific era in pre-war Manhattan, burnished with universals of youth and promise and the world awaiting.  Rules of Civility certainly flashes a Dorothy-Parker-ish zip, but what give it soul is a hovering Fitzgerald-like maturity, at once pensive and poignant.–The Cleveland Plain Dealer

This book is simply magnificent.  A magnificent debut, for the first time author Towles, but more than that:  just a truly creative, brilliant, different book – one that succeeds at feeling both like a throwback to a Jamesian era of well-developed sentences undergirding fully-formed thoughts, and completely fresh…[Towles] writes like a novelist on his 10th book, not his first.”–The Buffalo News

“Towles’ sleek debut novel, set in the glittering and gritty New York City of 1938, nods smartly to Scott Fitzgerald, Ernest Hemingway, Dorothy Parker, Henry James, Edith Wharton…Central to this elegant book’s plot is that American-as-apple-pie pastime:  reinventing the self (and doing one’s best to hide the old one).  Pretty much none of the people in Rules of Civility are what they seem, and just how they misread each other – and we misread them – makes for a fascinating dance…Towles has a lovely way with language and a deft wit, and his characters are that rare thing, both convincing and surprising.”–St. Petersburg Times

“This book feels special. Divided into quarters, it beautifully evokes each season in Manhattan and that city’s fortunes in the crack of light between economic recovery and a nation being dragged into a world war; a metropolis that can lift you up when life is going your way but lose the compass when you’re at an ebb. Towles was born to write.” –The Age (Melbourne, Australia)

“Glittering…filled with snappy dialogue, sharp observations and an array of terrifically drawn characters…Amor Towles’ stylish, elegant and deliberately anachronistic debut novel transports readers back to Manhattan in 1938…like the literary touchstones he evokes–F. Scott Fitzgerald, Edith Wharton and Louis Auchincloss…Towles writes with grace and verve about the mores and manners of a society on the cusp of radical change.” –NPR.org

Rules of Civility… is a book of amazing depth. In this, his first novel, Amor Towles reveals an exceptional flair for character development. Whether unveiling fresh insights into protagonists like Katey or Tinker or evoking the inner lives of secondary characters like Nathaniel Parish, the gentlemanly, old school editor who gives Katey her start in the publishing world, Towles’ command of human dynamics never falters. –California Literary Review

“Rules of Civility is a love letter to [the] seemingly random choices that 20-somethings make, but it’s also a paean to the post-jazz age and the city itself…[the novel] is infused with [contemporary parallels], deliciously evoking both a New York that will never again be in tandem with a New York that is unchanging, whether the power players live in an Upper East Side brownstone or a Bedford Avenue railroad apartment…a judgment-free, glorious romp that casts an egalitarian light on elegant and cruel social climbers; poor but pretentious artists and shy, quirky millionaires whose lives organically intersect in the only city where such a thing has always been possible.”–thedailybeast.com

“Brilliant…Towles does a stunning job here, unleashing powerful ideas about women, class, and the American dreams of the Greatest Generation.  Devoted to creating a true and full picture of 1930s New York, he plants endless rich details – obscure, historical, humorous – into Katey’s story, giving depth to even the most minor of characters and locations.”–thedaily.com

“It’s the Depression, and a gal Friday with a mouth like Dorothy Parker’s is dallying with the smart set…turns out she’s not the only climber.  A joyride through the ups and downs of 1930s high society.”–Good Housekeeping

“A smashing debut…remarkable for its strong narrative, original characters and a voice influenced by Fitzgerald and Capote, but clearly true to itself.”–Publishers Weekly

“The characters are beautifully drawn, the dialogue is sharp and Towles avoids the period nostalgia and sentimentality to which a lesser writer might succumb.  An elegant, pithy performance by a first-time novelist who couldn’t seem more familiar with his characters or territory.”–Kirkus Reviews