The Didomenico Fragment: a Short Story on Audible 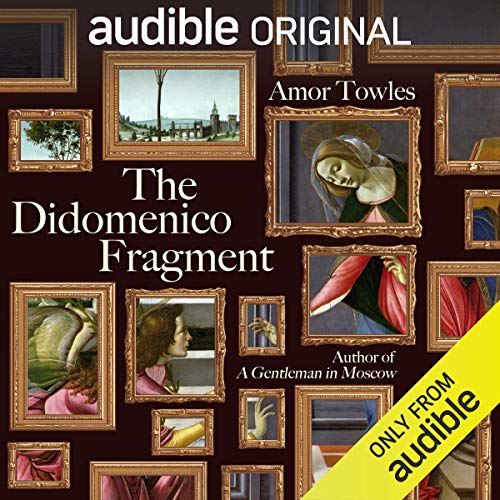 In early 2021, the audio book platform Audible released a longish short story of mine called The Didomenico Fragment which is perfectly narrated by the great John Lithgow.

Clients of Audible can access the story here for free. While the story is only available at Audible for now, it will be included in a collection of my short stories to be released in the years ahead.

From the New York Times best-selling author of A Gentleman in Moscow and Rules of Civility comes a stylish and alluring new story about art, money, and a precious family heirloom – brought magically to life by the beloved voice of six-time Emmy-winner John Lithgow.

Like many well-to-do Upper East Siders over the age of 65, esteemed art appraiser Percival Skinner had planned to spend his retirement living off his savings. But a market correction has left him living below his prior means. One day he’s visited by a dapper fixer in search of a famous work by the Renaissance master Giuseppe Didomenico. Skinner knows the work well: The original was owned by his ancestor, and was passed down through his family over the generations. If, as an intermediary, he can coordinate a sale, a small fortune awaits. Problem is, he might not be the only one on the make.

Told with the quixotic energy of a classic Henry James tale and the gleeful absurdity of drawing-room comedy, this playful and effortlessly heartwarming story from one of America’s most gifted writers is a welcome reminder that sometimes what we find is more valuable than what we are looking for.

About John Lithgow, the Narrator

John Lithgow’s celebrated career began on the stage. Weeks after he made his 1973 Broadway debut in David Storey’s The Changing Room, he won his first Tony Award. Since that promising beginning, he has performed on Broadway more than 20 times, with iconic roles in M. Butterfly, The Front Page, Sweet Smell of Success (for which he won his second Tony Award), and Dirty Rotten Scoundrels. He’s been nominated for more than ten Emmy Awards and has won six, for unforgettable performances including his portrayals of Winston Churchill on The Crown, serial killer Arthur Mitchell on Dexter, and alien High Commander Dick Solomon on 3rd Rock from the Sun. Lithgow’s extensive television work has also won him two Golden Globes, three Screen Actors Guild Awards, an American Comedy Award, and a Critics’ Choice Television Award. A two-time Academy Award nominee for Best Supporting Actor (The World According to Garp, Terms of Endearment), he is also an accomplished painter and the author of the memoir, Drama: An Actor’s Education, and several best-selling children’s books.