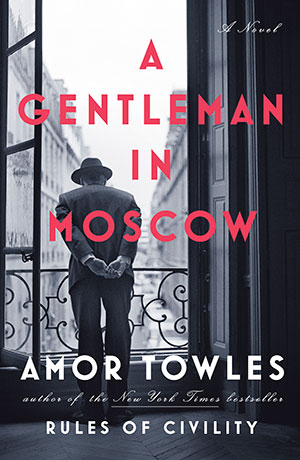 The following playlist includes five classical pieces referenced in A Gentleman in Moscow listed below in the order in which they appear in the novel:

Pyotr Tchaikovsky: The Nutcracker, Act One (1892)
Though The Nutcracker, its spirit, and its various characters (especially Drosselmeyer) are referenced throughout the novel, Act One is featured at the end of the 1926 Chapter in the Count’s list of three important contributions by Russia to the West.

Pyotr Tchaikovsky: Piano Concerto No. 1 in B-Flat Minor (1892)
It is a recording of Vladimir Horowitz playing this concerto at Carnegie Hall that the Count listens to alone in his room at the end of the 1946 Chapter (thanks to Richard Vanderwhile), and which becomes a symbol for him of “the Former” over “the Latter” in the 1952 Chapter. Horowitz, who defected from the Soviet Union in 1925, had his debut in the United States at Carnegie Hall in 1929 playing this piece.

Frederic Chopin: Nocturnes, Op 9 No. 1-3 (1832)
It is the second of the three Nocturnes that Sofia plays for the Count in the 1954 Chapter, the day he discovers that she has been studying piano in secret.

Wolfgang Amadeus Mozart: Piano Sonata No. 1 in C Major (1774)
This is the “delightful composition” that Sofia plays to win the student competition at the Moscow Conservatory (despite the Count’s concerns that it might be too delightful).

Sergei Rachmaninov: Piano Concerto No. 2 in C Minor (1901)
It is this concerto that Sofia plays in the 1954 Chapter with the orchestra of the Moscow Conservatory at the Salle Pleyel in Paris…